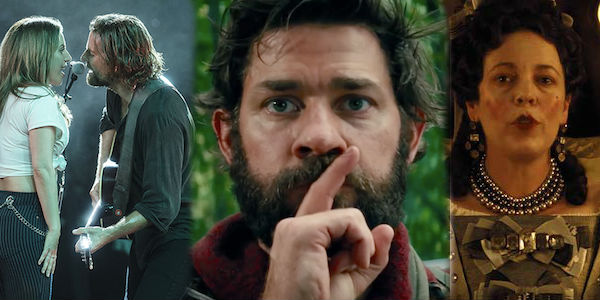 Another year, another year end movie review. Who would I be if I didn’t join with my fellow critics to memorialize the best movies and performances of the year! It seems like just last week I was writing my 2017 year end review, and I can’t believe it’s already time to celebrate another year of movies. I am so blessed that I continue to get to indulge in my longtime movie obsession by seeing over 150 new movies this year, interviewing filmmakers, and getting to attend such awesome film events as the Toronto International Film Festival (TIFF). As always, my list of favorite movies of the year are just that, the ones that I absolutely adored and stuck with me throughout the year. I had an especially difficult time narrowing down my best actress performances of the year to my top 10, but I did the best I could! Here’s to hoping future Lauren doesn’t look back on this list and wonder what in the world I was thinking not including XX movie/performance.

Best Movies of the Year

Nicole Kidman. That is all I need to say. Just look at her performances this year… from a big-haired preacher’s wife in BOY ERASED, to an abused Monterey housewife/mother in BIG LITTLE LIES, to this hardened detective with serious baggage in DESTROYER, Nicole has used 2018 to prove her talent as a character actor with a dynamic acting range. DESTROYER not only displays one of Kidman’s best performances, allowing her to completely transform for a role, but it also is one of the best crime thrillers of the year. With its twist-filled script and the incredible chemistry between Kidman and Sebastian Stan, it should be no secret why this is in my top ten. I also appreciate it was directed by a female director, Karyn Kusama. Kidman has pledged to star in at least one female directed movie every eighteen months to give more women the opportunity to get their movies made. In the last 2.5 years, she has worked with five female directors… so you see how that pledge is going.

Writer-director David Gordon Green and writers Danny McBride and Jeff Fradley did such justice to the HALLOWEEN fans and the franchise itself, I can’t imagine that anyone could give this a bad review. I saw HALLOWEEN with the most hyped crowd you can imagine in the Midnight Madness screening of the Toronto International Film Festival. It was awesome to see Jamie Lee Curtis and the rest of the cast and crew sit through the film and experience the fandom-fueled atmosphere. I hardly ever cheer in movies, especially when I am sitting by myself, but boy did I cheer in HALLOWEEN. It just spilled out of me in several scenes, maybe as a tension relief, but also… why wouldn’t I when a movie is such a freakin’ love letter and wink to fans?! Also, you better believe that when there are strong female characters involved, I am going to be screaming and cheering my head off when they get any punches in.

BLACK PANTHER was my favorite movie-going experience of the year. Not only is the movie one of the best superhero films ever made, with incredible action and a ultra talented ensemble cast, but hopefully Hollywood will take note that there needs to be more diverse stories and characters shown on the big screen based on the insane box office numbers and overwhelmingly positive critical/audience reception for the film. I started tearing up multiple times during the movie watching two young kids sitting in front of me ecstatic that they finally saw themselves represented in such a huge way. Michael B. Jordan gives a showstopping performance; so much so, he was my favorite supporting actor of the year. Jordan brought a layered, multidimensional performance to an incredibly interesting, and ultimately sympathetic villain.

I am a HUGE fan of the MISSION IMPOSSIBLE franchise, and my fandom was heightened even more after ROGUE NATION and the introduction of my favorite character in the franchise, Ilsa Faust (Rebecca Ferguson). FALLOUT is a worthy sequel and culmination of all of Ethan Hunt’s previous missions. Cruise’s insane stunts are next level; I especially loved the scene where he drove his motorcycle, helmetless, through Paris traffic. As I said before, my favorite character in the franchise is Ilsa and I am glad we were shown more about her character and relationship with Hunt. Paramount must be breathing a sigh of relief that Rebecca’s Ilsa is standing by to take the reins of the franchise in case Cruise’s Ethan Hunt decides to call it quits… or if they want to really double down and set a spinoff series around Ilsa. :prayer hands: And do I really need to mention Henry Cavill’s incredible turn as the villainous Agent Walker… to say I swooned every time he was on screen is an understatement.

Let me be frank, HEREDITARY isn’t for everyone… but man oh man did it scare the crap out of me. I honestly think the studio should have filmed me watching this movie with a heart monitor for marketing purposes. I was probably borderline in medical distress the entire time and watched a lot of the movie through my fingers. HEREDITARY is one of the best horror films of all time and easily one of the scariest movies I’ve seen in theaters; it’s honestly incredible that such a masterpiece was made from a first time director! If you can stand it, multiple rewatches of the film will lead you to discover more and more Easter eggs that you probably didn’t notice the first time. And not only is the movie poop your pants scary, but it is a showcase for Toni Collette’s superb acting skills. I have followed her career for as long as I can remember and I am glad she is finally getting the accolades she deserves!

Viola Davis’ arms and attitude. Cynthia Erivo running and robbin’. Michelle Rodriguez kicking ass. Elizabeth Debicki towering over d-bags. Like who do I need to thank for writing such a masterpiece? Oh yeah, GILLIAN FLYNN, writer of GONE GIRL, SHARP OBJECTS, and so many other fantastically thrilling novels! With another incredible ensemble performance (that seems to be a theme with my picks this year), a twisty/action-packed screenplay, and poignant score, I wouldn’t be surprised if this lands on many more end of the year lists. I just wish there were more husbands to kill so we would get a WIDOWS 2. Come on, Gillian… find a way!

BEN IS BACK is not only one of my favorite movies of the year, but is one of the most important. Focusing on how a mother’s love can withstand even the most dire of circumstances, the film portrays the pain and tragedy caused by substance abuse and how it affects a family. Julia Roberts gives one of the best performances of her career; so much so, in many of the scenes it doesn’t even feel like she is acting. Although on the surface, Roberts character is a strong, no-nonsense mama bear, internally she is struggling with how to best protect her son from relapsing; she navigates this delicate balancing act magnificently. Lucas Hedges, who had a great year also starring in BOY ERASED, is fantastic in the film as well. Even as an audience member, I found myself relating to Roberts, unable to tell whether I could trust Hedges’ character or not.

I have watched this movie four times already this year and love it even more each time I see it. It is so much more than a horror film; it’s a smart, psychological thriller; it’s a love story between husband and wife and parents and their children; it’s a psychological thriller; it’s a celebration of accepting differences. John Krasinski not only starred in this film, but wrote, directed, and produced it as well. And can we get a round of applause for Emily Blunt who went from this performance (picture the bathtub scene) to playing Mary freakin’ Poppins? Like come on. Could these talented humans be any more perfect together? Rounding out the cast was the talented Millicent Simmonds, who was the heart of the film; I loved that Krasinski cast Simmonds, who herself is deaf, to play the role of his hearing-impaired daughter in the film. It’s sad that should even be mentioned, but with Hollywood’s history of casting actors without a disability to play a character with a disability, it is admirable that Krasinski put his foot down during the casting process. I could seriously go on and on about how great this movie is; I just wish it was getting more acclaim during the upcoming award season. Thankfully, it did gangbusters at the box office and John Krasinski is already writing a sequel. I know I am super excited to see what he does with it.

As the the third remake (and fourth film altogether) in the A STAR IS BORN series–if that is what we are calling it now–Bradley Cooper pulls off the triumph of the year with an extraordinary pop-rock musical that is sure to become a classic. It is hard to believe this is his directorial debut. And with Gaga absolutely BRINGING IT, I will most assuredly be rooting for this movie to clean house at the Oscars this year. With the potential for nominations in six major categories (Best Picture, Director, Adapted Screenplay, Actor, Actress, Supporting Actor), A STAR IS BORN has the potential to make history. Now please excuse me while I go listen to the soundtrack for the 92039023049234 time and sing at the top of my lungs.

I have been going back and forth between THE FAVOURITE and A STAR IS BORN as my favorite movie of the year. Having just rewatched THE FAVOURITE, it is at the top of my mind right now. I just love everything about this movie. I am a serious connoisseur of period films and TV shows, especially when it comes to British royalty so this was definitely in my wheelhouse. All three female actors Olivia Coleman, Emma Stone, and Rachel Weisz give some of the best performances of the year; but it’s Olivia Coleman’s layered, gut-wrenching performance that is really going to stick with you. From its extraordinary FEMALE ensemble cast and an imaginative, at times humorous, script that makes it not your average period piece, THE FAVOURITE is hard to resist.

Most Underrated Movie of the Year

Although this film did receive critical acclaim, I don’t think enough general audience members have seen it. Written and directed by Joel Edgerton, BOY ERASED is a great movie as much as it is an important one. Tackling the issue of conversion therapy, the film brings a very disturbing subject matter to the forefront, publicizing a horrific experience that too many LGBTQ youth have faced in their lives.This film could easily step over the line into Lifetime movie sappiness territory, but Edgerton’s astute script and direction keeps it grounded in realism. By the end of BOY ERASED, we are left with an important message: you can’t pray the gay away and those that are pushing for conversion therapy need to have their own minds reprogrammed for acceptance and love. If I had it my way, this film would be shown in every high school, community center, and church across America to show LGBTQ youth there is nothing wrong with them; there is EVERYTHING wrong with those that are pushing them to change who they are.

Bradley Cooper- A Star Is Born

Lucas Hedges- Ben is Back

Lady Gaga- A Star Is Born

Julia Roberts- Ben is Back

Sam Elliott- A Star Is Born

Richard E. Grant- Can You Ever Forgive Me

View all posts by Lauren Bradshaw